Throughout the world of travel, certain experiences capture the imagination and draw people in from far and wide. The Trans-Siberian railway is one such trip that has lured in thousands of foreign tourists keen to snake their way across Russia, but, in recent years another train ride has begun to rise in popularity.

Running 700km across the African country of Mauritania, this is technically a cargo only railway line. Every day, vast amounts of Iron Ore from the country’s desert mines deep in the Sahara, are taken out to the ports so it can be shipped abroad.

Trains on this track sometimes run up to 3km long, making them some of the longest and heaviest trains on Earth. Whilst waiting in the town of Choum on our research trip, the train certainly made it’s proportions known well ahead of time.

As we sat drinking tea in a guesthouse, a faint rumble would begin to emit from the ground. The trains run on no real schedule, and not all of them stop in this town, so our ears became fine tuned to any approaching train. 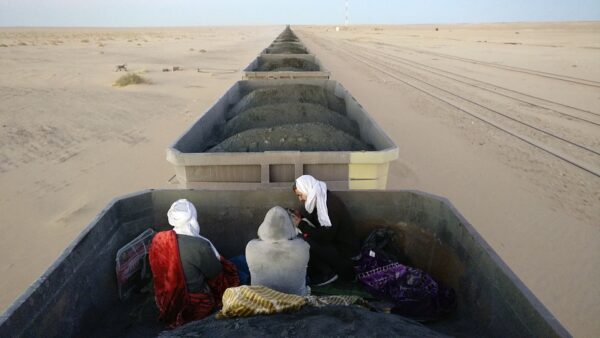 Despite the tremor, as we emerged outside with our luggage, the train was still far off in the distance. It approached slowly with no appearance of stopping, much like a steam roller. After some frustrating fly-bys, finally, one of these behemoths pulled to a stop in front of us, it’s brakes squealing under the load of the Iron Ore.

There was a millisecond of calm as the train fell silent before us and before the local passengers began the rush to board the train. The train does feature a single passenger carriage at the rear end, however, conditions are known to be so bad in the carriage that most people opt to sleep on top of the ore itself.

A scout from each group would nimbly climb up the ladders of the cars nearest them to check that the level of Ore was low enough for people to fit inside below the edge of the hoppers. Much like Goldilocks, we found the hopper that was just right for us and quickly got in before the train resumed it’s journey into the Saharan night. 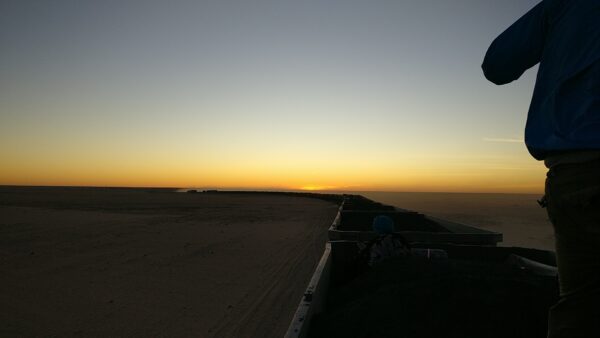 After carving out body shaped grooves in the ore, we laid out our blankets and sleeping bags and prepared for the cold night ahead. With the lack of light pollution, the night sky was stunning and more than made up for the discomfort with it’s blanket of stars and the Milky Way tracing it’s line across the sky.

The Iron Ore itself is ultra fine, and also magnetic, meaning it finds its way into any electrical nook and cranny. Many of our phones and cameras were wrapped in improvised covers to protect them but allow them to still be used. Luckily these all seemed to be effective.

Throughout the night, you never really feel like you actually fall asleep, with the loud clanging of the tracks below and the cool night air whizzing past. As sunrise poured over us, we got some of our first clear views of this behemoth of a train snaking its way through the dunes both ahead of us, and behind us.

Reaching the sea, we disembarked, our clothes more or less ruined but our trip had been a success. If you fancy trying out the Iron Ore train yourself, you can see our tours to Mauritania and Western Sahara here.

This website uses cookies to improve your experience while you navigate through the website. Out of these cookies, the cookies that are categorized as necessary are stored on your browser as they are essential for the working of basic functionalities of the website. We also use third-party cookies that help us analyze and understand how you use this website. These cookies will be stored in your browser only with your consent. You also have the option to opt-out of these cookies. But opting out of some of these cookies may have an effect on your browsing experience.
Necessary Always Enabled
Necessary cookies are absolutely essential for the website to function properly. This category only includes cookies that ensures basic functionalities and security features of the website. These cookies do not store any personal information.
Non-necessary
Any cookies that may not be particularly necessary for the website to function and is used specifically to collect user personal data via analytics, ads, other embedded contents are termed as non-necessary cookies. It is mandatory to procure user consent prior to running these cookies on your website.
SAVE & ACCEPT